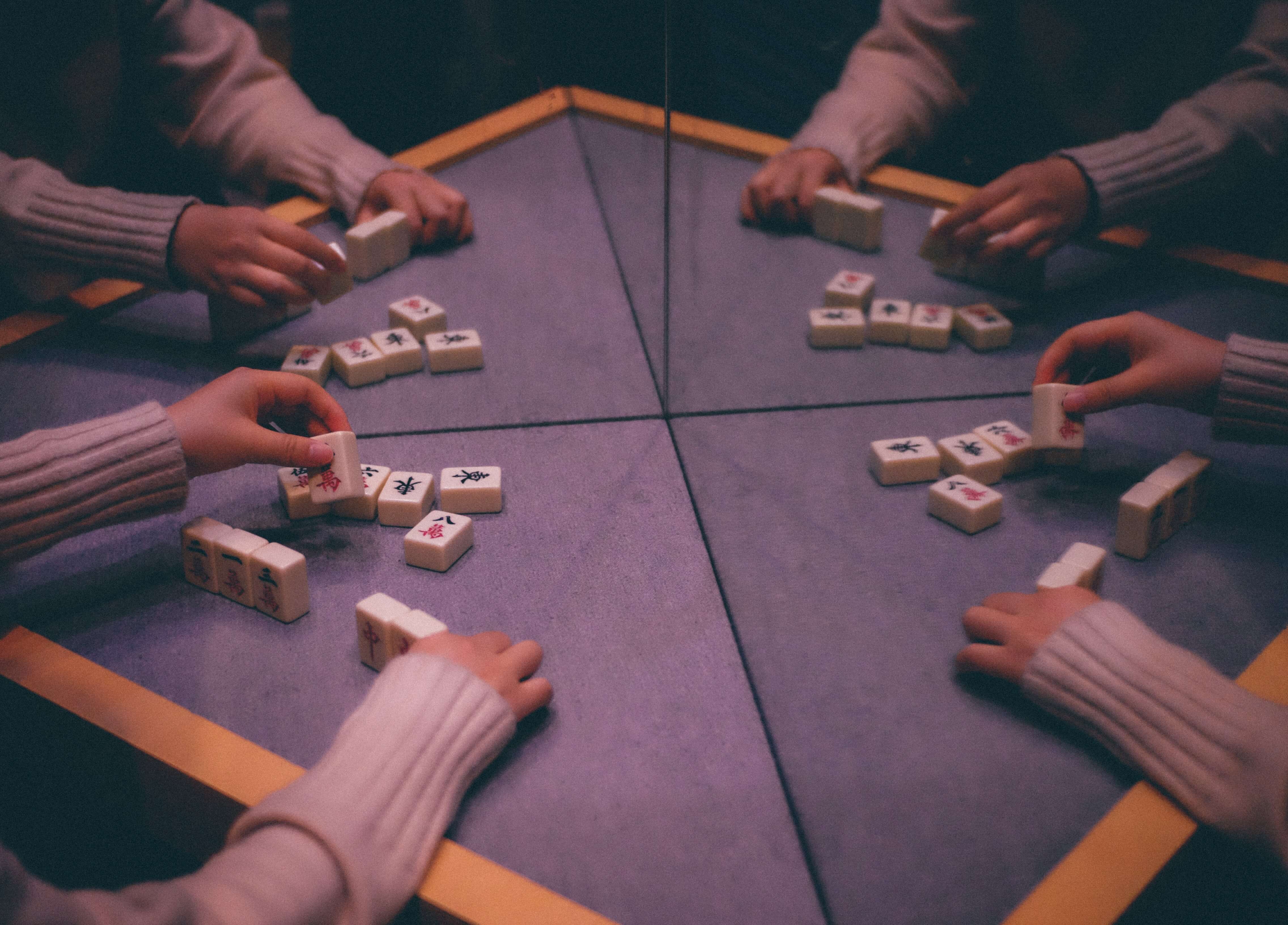 Mahjong is a popular game played by people all over the world, often in Mahjong parlors or park benches. While it can be played anytime, it is not uncommon to find people in celebrations and festivals playing it. The game is played with a set of numbered tiles. In the past, these tiles were made of bamboo or bone. However, nowadays they are made of plastic. Players are given 144 titles, 36 in the bamboo suit and another 36 in the circle suit. The remaining are distributed as 16 wind tiles, 12 dragon, and 8 bonus tiles. As with many solitaire games, this also has variants, depending on a player’s region. For example, the extra eight titles are given as four flowers and four seasons. However, players in northern China don’t utilize these tiles. Instead, they play with only 136 tiles.

A Brief History of Mahjong

There are many theories trying to explain the origin of this game. Some date it back to the Confucius time, but there is no proof for this. Another theory says Mahjong was invented by ZhengHe, a Chinese explorer who commanded sails across Asia and Africa. It’s said that he invented it as a way of entertaining his crew members during their journey. This theory believes that the sailing references found in the tiles came from this invention. However, in 1848, Chen Yumen, originating from Ningbo, created this game based on Peng He Pai. Rather than using paper, he used bone and bamboo to make the playing titles. Soon afterward, the game spread to other cities in China, and in the 20th century, it spread past China’s borders. This, therefore, led to the modification of the rules. Mahjong clubs were then established in Japan, and in the 1920s, the game was adopted by the British and American communities.

What Are the Set of Tiles in Mahjong?

As we’ve earlier mentioned, the original Mahjong version used a standard of 144 titles. However, depending on the location, players can play with a different number. Let’s explain the tiles in this game.

Circles or Dots- these are 36 of them, which come in identical sets of four each having nine titles with 1-9 circles engraved on them.

Bamboos- Mahjong features 36 of these titles in 4 similar sets of 9 tiles that have a 1-9 bamboo stem engraved on them. They are also known as bams.

Characters- they are 36 tiles coming in identical sets of 4 each having nine titles with 1-9 numbers engraved on them.

Winds- these are 16 in number and come in 4 identical sets each having 4 tiles for the four directions of the wind; east, south, west, and north listed in this exact order.

Dragons- are 12 in number and come in an identical set of 4 each with 3 tiles of the color white, green, and red.

What Are the Rules of Playing Mahjong?

Different versions of this game have some varying rules. The four main versions are Chinese, Hong Kong, American, and Japanese. Let’s focus on the rules of playing American Mahjong. Note that they follow a set of rules outlined by the National Mah Jongg League. These rules cover winning hands which are regularly updated, and priority calls for when a player discards multiple sets of cards. In that regard, here are the rules;

How to Setup Mahjong

Players begin by shuffling the wind tiles face down, which those throwing the dice will deal with. They then sit as per their title in a clockwise order that is, north, west, south, and east. Players take turns to be the dealer and all of them must deal at one point. To make it fair, some decide to roll a dice to determine who’ll be the one dealing.

Cards are then shuffled together and a wall of 34 face-down cards is built with the tiles in front of the players, which is 17 long and 2 tiles down. Ultimately, the game should form a large square tile wall in the table’s center. If you’re playing in a Mahjong parlor, it likely has automatic Mahjong tables, hence players don’t need to build the wall.

The player dealing then rolls the dice and counts the number of tiles from their edge’s right. He/she then separates the wall at this stage and deals with tiles from that spot’s left, in a clockwise direction. Players then arrange their tiles facing on their side so that others can’t see. The dealer then discards one tile and gameplay begins to the right of him/her. 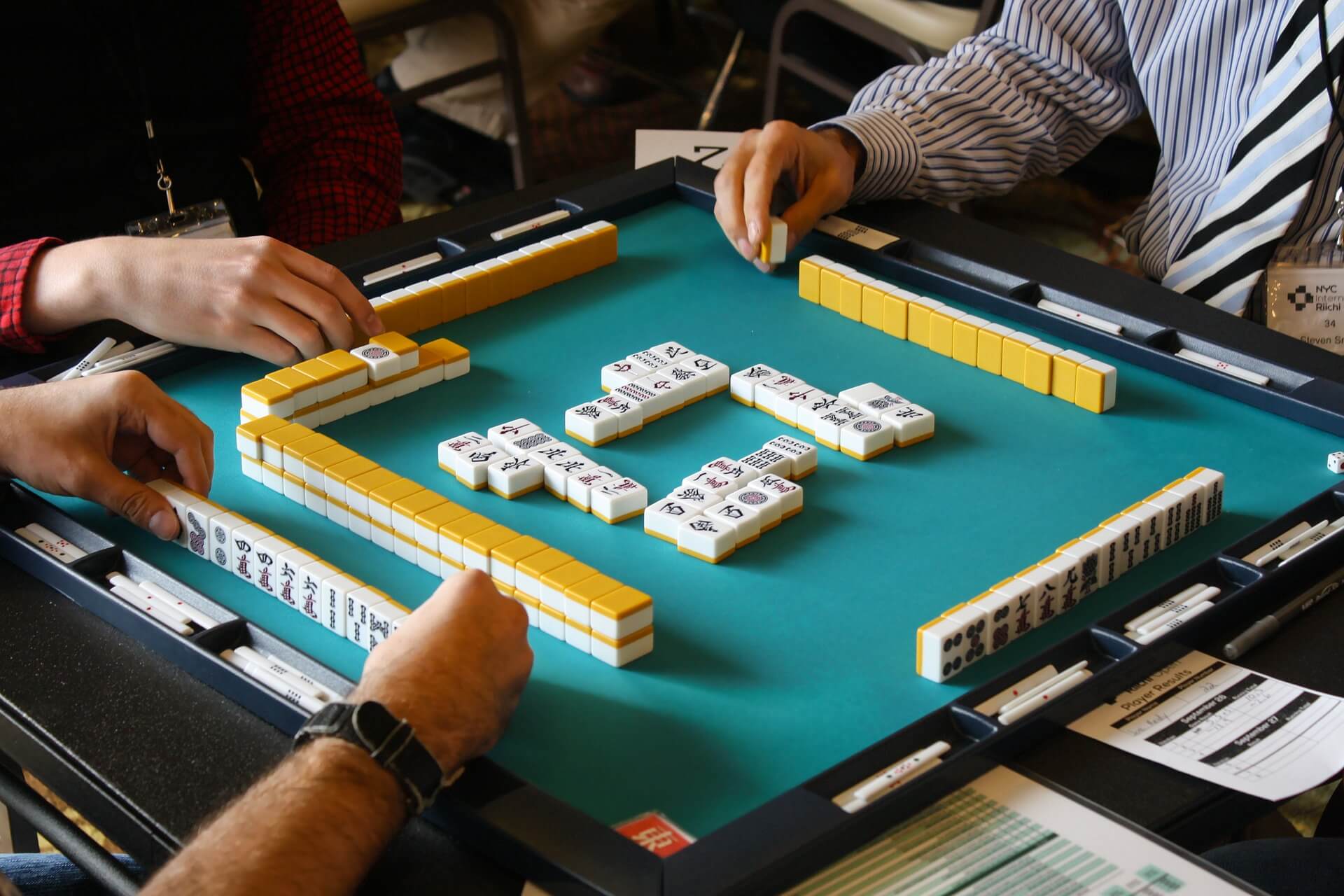 How to Play Mahjong

There are different ways you can play Mahjong including;

Begin by choosing cards or blocks- the traditional Chinese Mahjong game uses blocks. However, individuals in western cultures play with cards. You can purchase them online or from a game store. But, we always advise that you use the original thing instead of cards to get a real feeling of this game.

Set up blocks. The original setup uses 144 blocks having a spider shape and other 3 extra layers on top that form a pyramid. But, players mustn’t adhere to this traditional form. You can place your blocks randomly to make the game more unpredictable. Basically, you should have four layers, in a not perfect shape of a pyramid. Traditional setups for this game use 4 jetting arms that face on the floor horizontally on the four square corners of the pyramid. These arms will then open up as you play to make the game easier. If you’re unable to create your formation, you can use the available online templates. But ensure that your setup has a large base with the jetting arms and blocks that can be removed. Those using cards, however, should set them close to each other to save on space.

Find and remove blocks of a similar type. Note that you can only remove them if they are “open”, hence there shouldn’t be other blocks covering them on their long sides. The game ends after removing all blocks or when you are out of moves.

Discard those blocks in a side pile away from your game while still looking for open pairs.

Shuffle the remaining block if you are not able to win the game to create opportunities for new matching pairs.

Once all your blocks are gone or you are out of moves, you should remake the game to a new layout, for a challenge, or to the original layout you had when starting, for a simpler gameplay.

You can customize the rules yourself to make the game more interesting. You score once all the tiles are removed correctly. Some sets may have a scoring of 1-7, depending on a particular type. Determine the type you are using and its scoring system to count your winning.

Search for a website offering this game, such as Mobilityware. You can even download Mahjong as a mobile app or a computer program. Typically when playing Mahjong on a website, there is similar gameplay to the original tile version. The goal of the game is to remove all the tiles from the board by matching its pairs. Select tiles with the same picture and they will disappear. You can only remove tiles that are free and not covered.

Select a layout- many programs use the traditional Chinese spider layout. However, some may have different layouts. Note that a layout affects your gameplay. Thus, be careful when choosing.

Remove block pairs that are open periodically from your game board. Use a strategy that will help you open up many blocks in future turns when removing.

If you’re stuck, use the hints tab on the computer to help you identify potential moves. If that is not helping, consider restarting your game, especially if you want to beat a specific target.

Try different versions of online Mahjong solitaire. There are many variations with extra features to make your gameplay more interesting. Don’t be hesitant to try them.

Your score is based on the number of matching tiles you have removed and your speed. If you remove all the blocks, you are awarded a bonus. With the online versions, scores are automatically calculated. Plus, many sites put up the high score list to motivate you in achieving your long-term goal.

Tips and Hints of Playing Mahjong

With a few strategies and tips, you can improve your gameplay and ‘go home with Mahjong’. A common strategy that many beginners use is to start collecting many sets of Kongs, Pungs, and Chows right from the beginning. However, if you aren’t careful this strategy can cause futuristic problems as you progress with your game. Instead, use these few tips to improve your play in Mahjong;

1. Avoid separating your tiles- to inform your opponents that you are almost compiling a complete hand, rearrange your tiles into Chows, Pungs, and Kongs. But, you can also use this strategy to send wrong information to confuse your opponents.

2. Focus on the free tiles- most tiles in the game are blocked. Therefore, don’t worry so much about them. Instead, pay attention to the cards that you can match and remove and make a move when you find an opportunity. A title can only be matched when there is a space on its side. Thus, you may want to begin with matching tiles on the top stack first. This way, you can easily match tiles and avoid trapping a tile.

However, in some instances, this tip may not work. Note that, like in all other solitaire games, planning is essential even for this game. Therefore, you may want to think carefully about every move that you make. Always ask yourself, if removing a particular tile will benefit you in the long run. If it won’t, rethink a different strategy.

3. Avoid Revealing Too Much of Your Hand-your discarded tiles will only be available after completing Pung, Chow, or Kong. But, whenever you do this, you’re disclosing the tiles that you are holding. Therefore, if you’re playing against an experienced player, they will soon predict the tiles that you pick and discard and tailor their play depending on your moves.

4. Focus on matching tiles horizontally as they’re often hard to remove. Also, match tiles which free up and open up new ones. Don’t match a pair that doesn’t open up anything.

You should also pay attention to cards discarded by other players and those left on the wall as the game approaches its end. Additionally, be careful with the tiles that you discard. Our advice is that you only discard tiles that other players have discarded already whenever possible.

Also, note that you can end up with a solution that can’t be solved. This means that you didn’t match the right pair of tiles earlier. With a solution like this, your best bet will be to shuffle the remaining tiles. Doing this will generate new pairs that will help you continue playing. You could also undo tiles up to the point that you went wrong, although this will be challenging.

What about the Special Hands

These are another set of tiles that players can carry to their Mahjong game. However, this will depend on the rules of the variant that you are playing. Some of the special hands include;

Well there you have it, everything there is to know about this game. Note that as with all other board games, Mahjong solitaire requires an effective strategy. You have to plan your moves and have some self-control to pass on some opportunities, which may negatively affect your play later on. The above tips will help you improve your gameplay, thus boosting your winning chances. However, the most important tip is to play this game regularly. The more times you play, the more you understand Mahjong’s rules, natural flow, and some tactics. This will help you predict moves that’ll be made with other players while hiding yours.