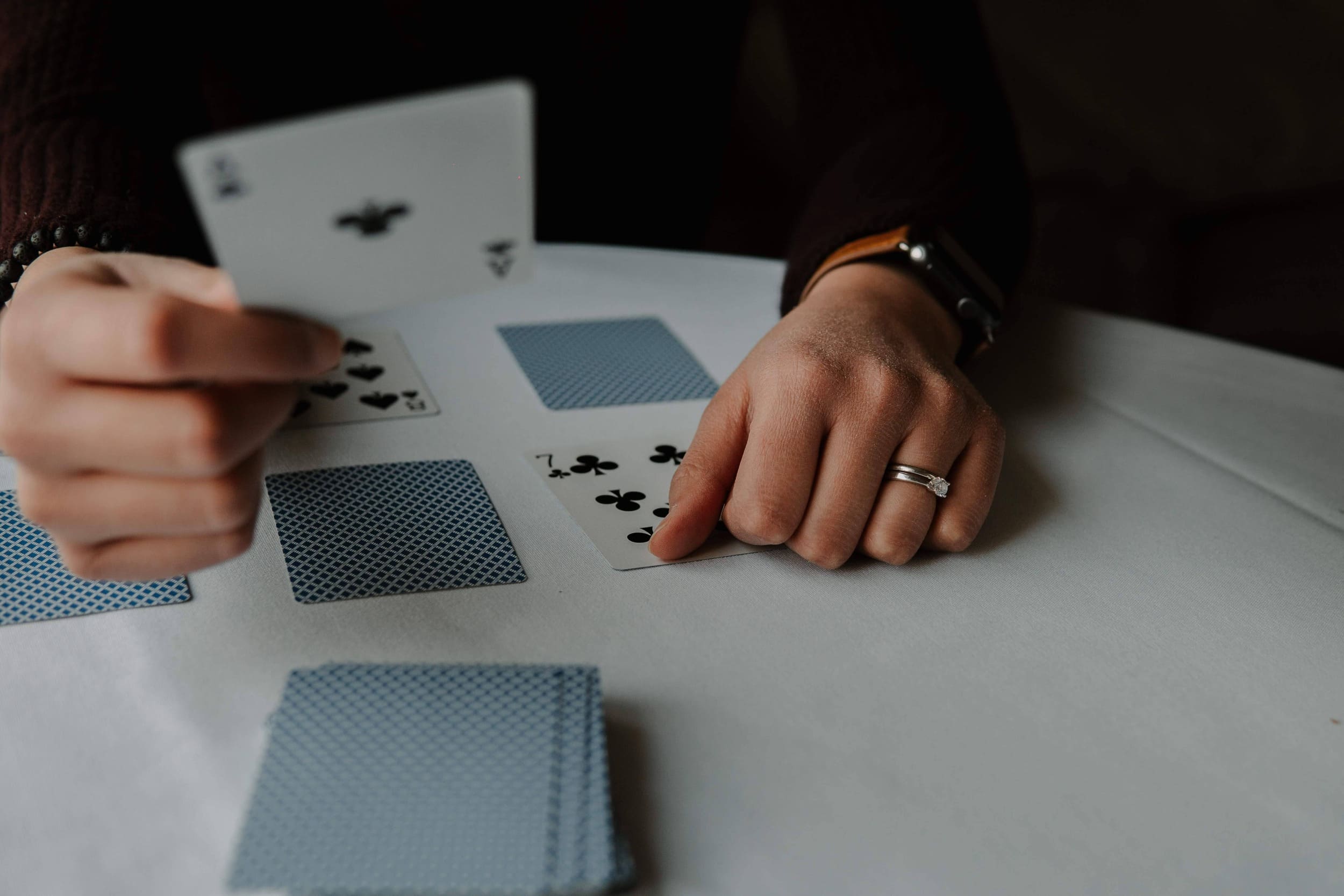 Solitaire refers to a series of card games that can be played by a single person. A player doesn’t need any other participant to play with them since he/she can play against the game. With many solitaire games, players are given 52 decks of cards without the Jokers. However, some variations of the game allow for multiple decks.

Your goal in all variations of the solitaire games available is to arrange cards by moving them over a tableau. These cards are usually ordered depending on the card ranking or by suit. How you arrange them will depend on which solitaire variation you are playing, as some use an ascending order while others use a descending order.

Note that solitaire has many different variations which we will talk about in this guide. If you are wondering how to play this game and/or how you can boost your chances of winning, you’ve come to the right place. Read on to learn about everything you need to know about the game of solitaire.

Solitaire originates from Germany. It first came into the limelight in 1788 after appearing in a book called Das Neue Königliche L’Hombre-Spiel. Some sources claim that solitaire was first used in fortune-telling, but later on it evolved and required strategy to play this game. Even today, some solitaire variations are exclusively used during divination.

After it was introduced in Rhineland, its popularity then moved to the French. It’s why many solitaire terms today have a French origin. For instance, Tableau means Table and Talon means Heel in French. There was a rumor that Napoleon spent his exile days playing this game.

In the 19th century, this game became very popular and was adopted into England as Prince Albert loved it. The first solitaire plays in English were released in the 1870s.

Soon after, they were made available in a book known as Illustrated Games of Patience. From then on its popularity moved to other parts of the world and engineers designed the first digital version that can be played onto computer screens.

There are terms used in solitaire that we feel it’s essential we explain before talking about the rules. This game consists of a tableau, which is the main playing area and has seven card piles. Also, there are Foundations that are 4 piles for 4 different suits that run from ace to king. Then there is the stock, which refers to a set of cards that aren’t used to create a tableau.

Lastly, there’s the talon or waste pile, which are cards from the stock that players cannot use to make legal moves. That said, let us get into the rules of playing solitaire.

Now, most solitaire variations use a standard deck consisting of 52 cards, minus the Jokers. While there are different variations of this game, they all apply to similar basic rules.

Your goal as a player is to transfer cards from their starting position to the card foundation piles. If you do this and observe all the solitaire game rules, you win this game. Here are the rules of playing solitaire.

You can only move cards from one pile to another while observing the specific solitaire rules. For instance, one can move a 6 on top of a 7 or a Queen on top of a King.

Players have to arrange cards in alternating colors. E.g., if the above card is red, the other must be black.

Moving a card from one pile to the next frees up the next face-down card.

You should fill foundations in ascending order and ensure that they match the appropriate suit. E.g., two of hearts can only go on top of ace of hearts, followed by three of hearts.

A vacancy will be created by moving an entire row to other positions to create an empty tableau.

Stockpile cards can only be used when a player runs out of moves. If a stock card cannot help you, it is then moved to the talon (waste pile).

Once all stockpile cards are moved to the talon, a player can start going through them again. Now, we should explain the different ways you can deal the remaining cards of the deck from the stock to talon. These are;

The game ends after moving all the cards from the stock and tableau to foundation piles, or when there aren’t any further legal moves that you can make.

Players can move face-up cards in a partial or complete pile as a unit to another tableau on the pile in descending order.

1. Bowling Solitaire- it requires a deck without face-down cards, only Aces through 10s. Once you shuffle your deck, you set up pins by building a pyramid using flipped-over cards consisting of 4 rows.

Therefore, your first row will have 1 card, the second 2, and so on and so forth. You then set bowling balls by making 3 piles, with the first one having 5 cards, the second having 3, and the third 2 cards. You can only flip the top card in these balls, and then you’ll use them to try to “knock” the pins down. Scoring is done like in a regular game of bowling.

2. Emperor- it’s a time consuming game that is similar to Spider Solitaire. It’s played with 2 standard decks of cards. It has 10 piles of four cards that you deal with. The first three cards in a column come as face down but the 4th card is placed face up.

You can’t move cards in groups, they must be moved one at a time. Your objective is to free the Aces, and then build the foundations in the tableau.

3. FreeCell- was invented back in the 1980s. It is a winnable game that consists of 52 decks of cards that you deal to 8 tableaus. The first and the last piles each have 7 and 6 face-up cards, respectively.

Players are given four storage piles where they can store cards. You can’t move more than one card in a single move in the FreeCell, hence the game can take some time.

4. Yukon- it uses 52 decks of cards, but there are not stock or talon piles. You use all the cards to make a 7 tableau pile when starting this game.

After making a traditional 7 pile tableau, you then need to add 5 extra cards to piles 2 thru 7, all face-up. A group of faced-up cards can be moved within the tableau, no matter its sequence.

5. Spider Solitaire- is a difficult version of the standard solitaire. It uses two card decks and a 10 tableau pile. Players are required to arrange cards in a similar suit in a descending order starting by King all the way to Ace within a pile.

After completing a pile in the correct order, you can then place it in one of the 8 foundation squares. You are required to make the sequence stack eight times. You win the game once you have filled all the 8 foundation piles.

6. Forty Thieves- also called Napoleon at St. Helena, doubles the cards that are used in Spider Solitaire. The available 10 tableau piles initially have 4 cards on each to make the forty thieves.

You need to build the tableau in descending sequence from King to Ace of a similar suit, instead of using alternating colors. Players can fill the empty space with any cards. The game is won when you transfer cards in a correct sequence to the foundations.

Other solitaire variations include Kings Corner, Accordion, and Street and Alleys.

Setting up solitaire is the most crucial and tricky part of this game. However, when you learn how to, you’ll be able to set your game within seconds.

Start with shuffling your cards then proceed to spread them across the table. The four main setup areas you can deal your cards are the tableau, foundation piles, stock, and talon, which we have already explained their meanings. So here are the steps of setting up the tableau.

Use this pattern until you’ve completed the setup. The 7th pile should have 6 cards and one card facing down and up, respectively. Once you’re done, put the remaining cards facing down above your tableau that is usually in the top left corner.

You’re now ready to play your first solitaire game. Note that the other 2 piles; the foundation and talon, do not have cards with them when you’re starting. 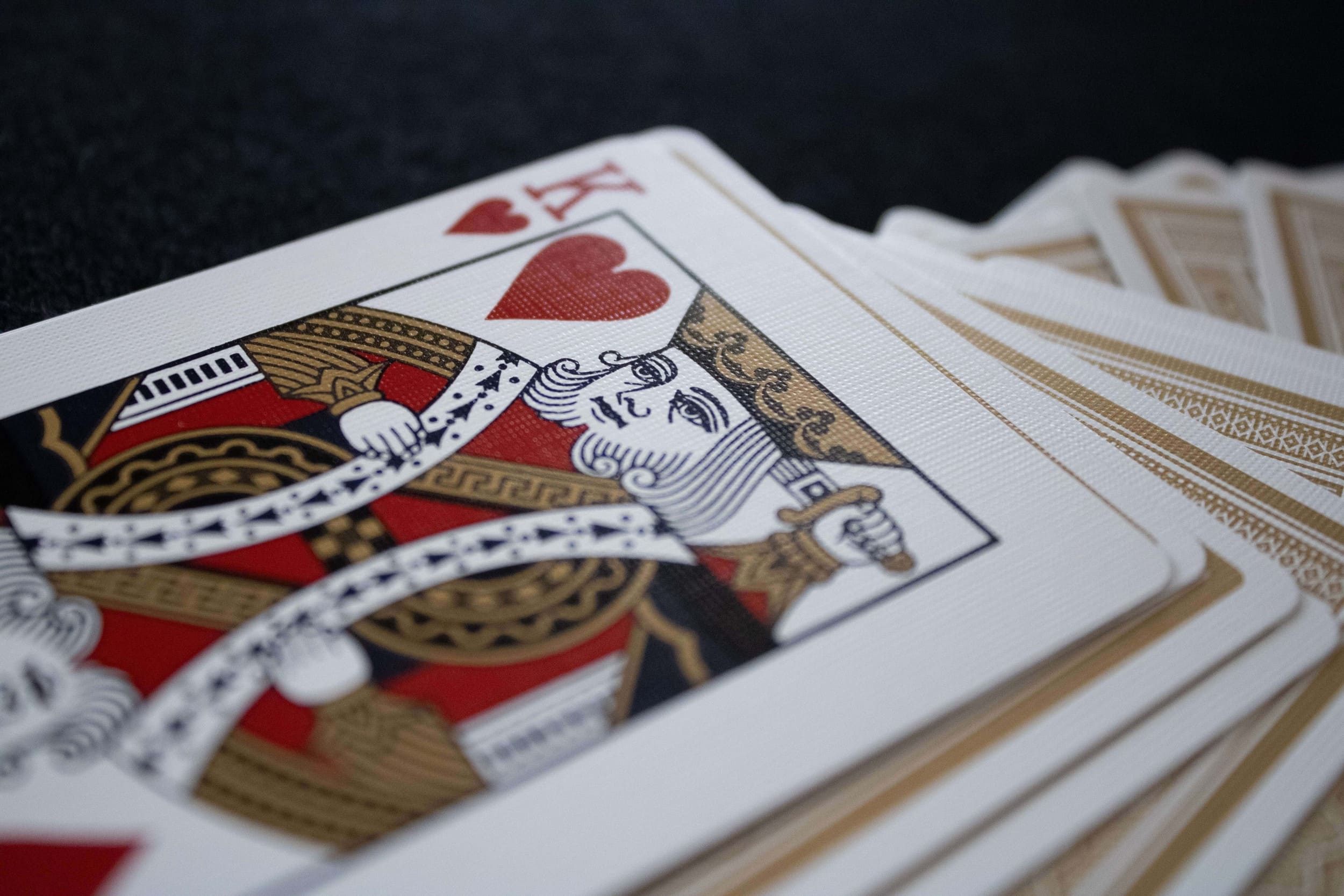 You just need a deck of cards to play solitaire and even wild cards wouldn’t be useful in a traditional solitaire game. Also, you need some space and a table; any will do but ensure that you have enough space. Also, since solitaire is a single-player game, you don’t need anyone to play. Once you break your deck and shuffle, you’re good to go. Here is how to play the standard solitaire.

Look at the face-up cards in your tableau. If you have aces, place them above the 7 piles to build your foundations. If there are no aces, rearrange your cards by moving only the face-up cards. On your top card, place a card under it that is of a value less and alternating color. Continue placing cards on the piles until you can no longer move.

Ensure that you arrange in descending order from King to Ace. Also, make sure that you can see the card on top of each stack meaning that it should face up. And if you move it, don’t forget to turn over the card beneath it. Foundation piles should start with aces going up to the highest card, a King.

And note that different piles start with different aces. Therefore, if one pile has an ace of spades on top, the other should start with the ace of hearts, then clubs, then diamonds.

If you’re out of moves, use the stock pile cards. Flip the cards as we have already explained in the rules. And once you’ve used up your stockpile, move to the waste pile, ensuring that you don’t reshuffle it.

If you have hidden cards, make sure that you make moves that will uncover them until you can hold, grab and put them eventually in the slot you desire. When filling an empty space, start a new tableau with a King.

Now, since you don’t play this game against other people, it doesn’t matter whether you win or lose. But, winning is always fun, which is why you need a strategy.

However, you should note that not every solitaire game can be won. Some cards can break down in a way that is impossible to win. Therefore, no matter what you do, the game will ultimately close down. Nevertheless, if you apply a bit of strategy, you’ll likely come close to winning the 80% winnable games. The following tips and hints will help you improve your gameplay.

Solitaire has many benefits to the body and mind. Apart from helping you pass time, it can increase your focus, patience, and cognitive function. But, while it is an easy game, it can still be challenging. Therefore, it is essential that you master the rules and take as much time as you need to win your game.

Also, employ the tips and hints we’ve reviewed above to help you when playing this game. However, remember that some games will remain unbeatable. Therefore, if you are out of moves, it’s time to end it.

So, there you have it. Next time you’re feeling bored and up for a challenge, you can have some fun on your own with this game. Solitaire can be exciting and addictive once you master the play.